2012 was the hottest year on record in the United States

2012 was the hottest year on record in the United States. Widespread drought, wildfires and extreme heat affected human health and caused food prices to skyrocket. According to new research out of Columbia University, however, last year’s heat wave may be nothing compared to what’s just around the corner. 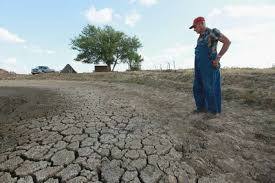 Researchers at the Lamont-Doherty Earth Observatory predict that a megadrought, the likes of which haven’t been experienced since the 12th century, could hit planet Earth within the next eight years, and it might never leave [PDF]. The cause? According to scientists, this drought will be brought on by “anthropogenic radiative forcing”, also known as ‘stronger-than-normal greenhouse warming caused by climate pollution’.

Because the human race, especially wealthy, super-polluters like the United States, have refused to heed the warnings about continued fossil fuel use, it’s likely that impending water shortages will make the 12th century droughts look like an unusually warm summer day.

“The new model simulations indicate that southwestern North America will become progressively more arid as the century advances with important changes appearing in the immediate future,” write the study’s authors. “Despite the fact that precipitation might increase in some regions and seasons (e.g. winter in northern California) while decrease in others, rising temperatures mean that a large majority of the model simulations project that spring and annual mean runoff will decrease. Soil moisture is also projected to decrease throughout the year, especially in Texas. The mean of the multiple climate models analyzed projects that annual mean runoff in the Colorado River headwaters in 2021-2040 will be 10 percent less than in the decades at the end of the 20th Century.”

There’s a lot of scientific terminology packed in there, but here’s a simple summary: Focusing on the near future, 2021–2040, the new simulations project declines in surface-water availability across the southwest that translates into reduced soil moisture and runoff in California and Nevada, the Colorado River headwaters and Texas. This is very bad news for anyone who eats or drinks water in America…which is everyone.

As Kim Martineau writes for Columbia’s Earth Institute blog, the study predicts “a 10 percent drop in the Colorado River’s flow in the next few decades [about 5 times the amount Las Vegas uses in one year]…enough to disrupt longtime water-sharing agreements between farms and cities across the American Southwest.” In case you were wondering, 40 million people depend on the Colorado River Basin for water and the river is already over-allocated.

Feeling alarmed? I don’t blame you. The idea that one of our biggest sources of fresh water will start to run dry in the next decade is more than a little troubling, yet I’ll bet this is the first you’ve heard of it. “The prepublication press release for this paper came out on December 23 and while it did get picked up by a few sources, the only major outlet was Agence France Press,” writes Bruce Melton for Truthout. “All of the coverage referenced the 10 percent reduction in streamflow that this work’s modeling projects for the near future. This seemingly small number appears to have limited journalists’ interest in the results of the research as a whole.”

Translation: mainstream media’s interest, which really means corporate interest. And then it becomes clear why no ones making any noise about this impending disaster–it might upset the fossil fuel companies who fund everything from your daily newspaper to your local politician. While the head-in-the-sand approach may be best for corporate profits, it’s detrimental for human survival.

Our addition to oil, gas and coal (despite a plethora of alternatives) is killing this planet, and soon, it will be killing us as well. Anyone who tells you different is either ignorant of the evidence, or financially invested in convincing you to ignore it.